Many, like Kiana Calloway, will cast their first ballots next year.

Forty-year-old Kiana Calloway doesn’t know what it feels like to cast a ballot.

He does know, however, what it’s like to be wrongfully convicted of first-degree murder at 16 years old, to be tried as an adult, and to serve 17 years in prison. He also knows what it feels like to live under strict parole for seven years, with a decade still to go. And as of Thursday, he knows what it feels like to stand in the Louisiana State Capitol besides dozens of people with criminal records as the governor signed a bill restoring voting rights to thousands of people like him.

“The energy was crazy,” Calloway told ThinkProgress. “When he introduced the bill, the whole room just roared. It was actually like a Pelicans playoff game.”

On Thursday, Louisiana Gov. John Bel Edwards (D) signed into law a bill that will restore voting rights to people with felony records who are on probation or parole, as long as they have been out of prison for five years. Both chambers of the state’s GOP-controlled legislature passed House Bill 265 with bipartisan support in May.

Roughly 70,000 Louisiana citizens are currently on probation or parole for felony crimes. According to the Department of Corrections, roughly 2,200 of them will be affected by this legislation when it takes effect March 1, 2019. Over the next few years, potentially tens of thousands additional offenders could also see their rights restored.

Edwards, a Democrat leading the deep red state, held a ceremony on Thursday as he signed the bill, flanked by returning citizens with felony convictions and their families and supporters.

And it’s a wrap! HB 265 is now officially a law! Thank you @smithpath, @LouisianaGov and all the hundreds of VOTE members and allies who made this possible! #victoryisours #winning #peoplepower #cantstopwontstop #civilrights #votingrights 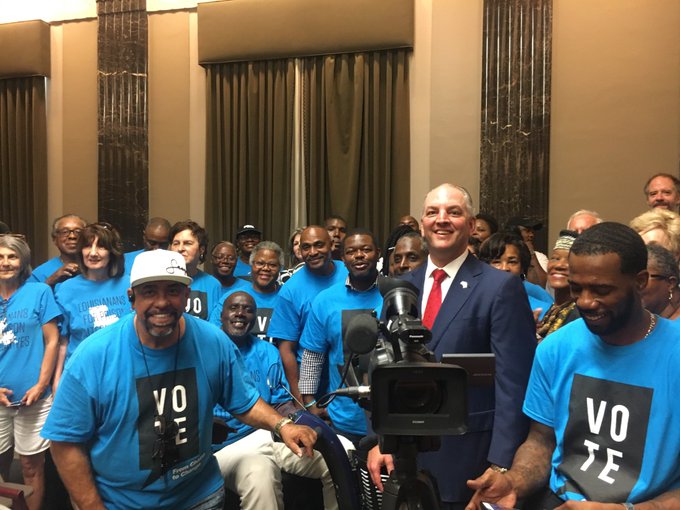 “I had a camera and I was getting footage of everything,” Calloway said. “That was definitely historical and needed to be documented.”

Calloway says he feels fortunate to be out in the world to experience that moment. In 1996, he was sentenced to two consecutive life terms without the possibility of probation or parole. Two years earlier, New Orleans had had the highest murder rate in the country, and he said he was framed by Jefferson Parish prosecutors who were desperate to secure convictions. But Calloway maintained his innocence and in 1999, “by the grace of God,” he said a judge reduced his sentence to 34 years for manslaughter.

After he served half that sentence and was released from prison in 2011, he had to figure out how to make a life in New Orleans as an adult on parole. A few years later, he found Voices of the Experienced (VOTE), the advocacy group that pushed for the voting rights legislation, and began working as the director of the housing justice campaign.

“When I was inside, I prayed that there were people such as myself and the people affiliated with VOTE to fight for me,” he said. “Now I have that chance to be the voice for the voiceless.”

Still, despite his advocacy and involvement planning candidate forums in local elections, he couldn’t vote.

“I felt kind of extracted from the whole process, by me not being able to vote,” he said. “I was dedicating so much energy and knew who I thought would be a good fit for a position or seat, but I couldn’t voice my opinion or cast my vote. That kind of discouraged me.”

Advocates with VOTE, like deputy director Bruce O’Reilly, recognized that a successful voting rights bill in Louisiana would require support from Republicans. Lawmakers recognized that disenfranchisement affects people in all districts — not just in cities — and that everyone deserves forgiveness.

“The question for me and you is: Is five years enough to earn the right to vote after the parole board says you can go out there?” asked Republican state Sen. Dan Claitor during debate over the bill on May 16. “I think it’s a reasonable thing to do.”

Next spring, Calloway will get a chance to vote for the first time in the May 2019 general election. By then, a lawsuit brought by VOTE over the state’s felon disenfranchisement will likely have been heard by the Louisiana Supreme Court, and even more people with felony convictions could have their rights restored. Roughly 1.5 million people in nearby Florida may also gain the right to vote if a ballot measure, the Voting Rights Restoration Amendment, is approved in November. Similar progress could be made in Mississippi, where there’s also ongoing litigation.

Calloway said while he knows what it feels like to watch critical elections pass without having his voice heard, he can’t predict how it will feel to cast a ballot for the first time.

“I have to wait until I actually pull back the curtains.”

Martin Luther King Jr. Was More Radical Than We Remember, Let’s do his memory justice!

Impeachment – The wait is over!