A black Texas student might miss out on his senior prom and his high school graduation ceremony because he wears dreadlocks.

DeAndre Arnold, 18, has been growing his dreadlocks since he was a seventh-grade student in the Barbers Hill Independent School District in Mont Belvieu, he told Fox 26 Houston.

DeAndre’s father, David Arnold, is of Trinidadian descent, and men in his family often grow their dreadlocks past hip length, the teen told KPRC.

As his hair grew, he and his mother, Sandy Arnold, would cornrow it down or intricately tie up his locs in a voluminous dark brown and honey gold bun to make sure his hair was off his collar, away from his earlobes and out of his eyes so he could meet the school district’s dress-code policy.

Her styling was no longer enough for the school, Sandy Arnold told Fox 26 Houston. Right before the school’s winter break, she and her son were called into the Barbers Hill High School principal’s office, where they were given an ultimatum: Cut DeAndre’s dreadlocks or face in-school suspension.
“They say you can’t get around the dress code by having it up,” she told Fox 26 Houston’s Isiah Carey. “We’re at a standstill.”

The Arnold family contends the dress-code policy concerning male hair was changed in the middle of the school year, they said in a Monday night school board meeting.

The school district is standing firm on its policy, which states male students can’t have their hair “gathered or worn in a style that would allow the hair to extend below” the collar, earlobes and eyes when let down.

A recent Fox 26 segment, Fox didn’t attempt to contact our PR Dir. which is irresponsible journalism. FTR, BH DOES allow dreadlocks. However we DO have a community supported hair length policy & have had for decades. BH Is a State leader with high expectations in ALL areas!

DeAndre and his mother consider the policy to be sexist, something Barbers Hill superintendent Greg Poole disagrees with.

“Every school district in the nation has a dress code,” Poole told KHOU-11, while emphasizing that school districts have the right to make dress codes that meet local expectations of style. “I don’t think you can go to school in your underwear.”

DeAndre’s refusal to cut his hair has stopped him from returning to normal classes, and his mother claims his only other option is to consider attending a nearby alternative school, according KHOU-11.

“My hair has nothing to do with my ‘excellence,’ as we say in Barbers Hill,” the teenager told the station. “How smart I am, what job I’m going to get — my hair doesn’t determine that. I determine that for my character.”

Schane Niemann, a barber, said he has known about the district policy for years and has seen boys in his chair because of the dress code. His shop is across the street from the school.

“Every day we have kids coming in saying that the school makes them come over to get their hair cut because they’re not in compliance,” Niemann said in an interview with KHOU-11. He added, “It’s by far not a race issue.”

Gerry Monroe, the executive director of the United Urban Alumni Association, attended the school board meeting on Martin Luther King Jr. Day to scold the school board for not understanding the religious and cultural meaning of dreadlocks.

“I get it. You don’t understand locs because ain’t none of y’all black,” he said to board members, who are mostly white, amid finger snaps and mumbles of approval.

Other residents in the school district remarked about the reasons the policy should stand or not.

“I won’t stand for anybody bullying my child,” David Arnold said, stating that he and his wife have tried to address school board meetings with no luck to discuss the policy they say was amended in the middle of the school year. “All he wants to do is graduate.”

The issue has caught the attention of high-profile athletes and politicians.

California’s governor, Democrat Gavin Newsom, called the policy “racial discrimination” in a Thursday tweet and touted his state’s reputation as among the first to ban hair discrimination.

A Black teen in Texas was suspended and won’t be able to walk at graduation bc his school says his dreadlocks are too long.

DeAndre Arnold’s mother told @FOX26Houston his hair “is a part of his culture, his dad is a Trinidadian… how can I put him in a barber chair.” [ 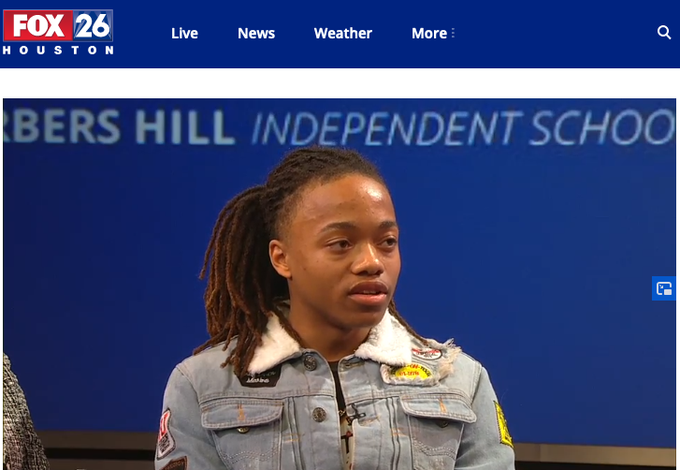 Houston Texans wide receiver DeAndre Hopkins, who shares a first name and wears a hairstyle similar to that of DeAndre Arnold, tweeted his support for Arnold on Wednesday.

Arnold has no intention of doing so.

“You can’t just let people walk all over you or anything like that,” he told KHOU-11. “You have to be willing to take a stand, and that’s what I’m going to do.”