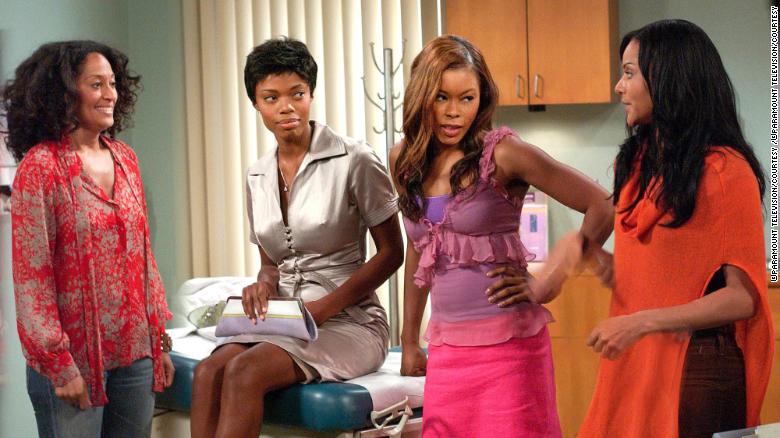 Tracee Ellis Ross, Jill Marie Jones, Golden Brooks, and Persia White in a Season 5 episode of ‘Girlfriends.’ (CNN) Girlfriends, assemble.
Tracee Ellis Ross, Golden Brooks, Persia White and Jill Marie Jones will share the small screen once again in an upcoming episode of ‘black-ish,’ marking the first time the quartet have reunited on television since the conclusion of their hit sitcom, “Girlfriends.”
On Thursday, Entertainment Weekly shared the first photo of their appearance on the ABC series, on which Ross stars as Bow Johnson.
“Being able to merge the worlds of black-ish and Girlfriends was surreal for me — and so much fun,” Ross told the magazine.
“Girlfriends” ran for eight seasons from 2001-2008 and spawned a spin-off called “The Game.”
The episode of “black-ish” featuring Brooks, White and Jones will air October 8. They play women in Bow’s feminist group.
Since the conclusion of “Girlfriends,” Brooks has appeared in the television miniseries “I am the Night,” White recurred on “The Vampire Diaries” and Jones co-starred in “Ash vs Evil Dead.”
Black-ish returns for its sixth season on September 24.
Tweet