Former President Barack Obama on Friday delivered his sharpest rebuke of President Trump since leaving office while urging U.S. citizens to vote in the upcoming midterm elections because “our democracy depends on it.”

“We’re supposed to stand up to bullies, not follow them.” Obama said in a speech at the University of Illinois in Urbana, where he accepted an award for ethics in public service.

The former president mocked Trump’s response blaming “both sides” for the deadly violence at a white supremacist rally in Charlottesville, Va., in 2017. 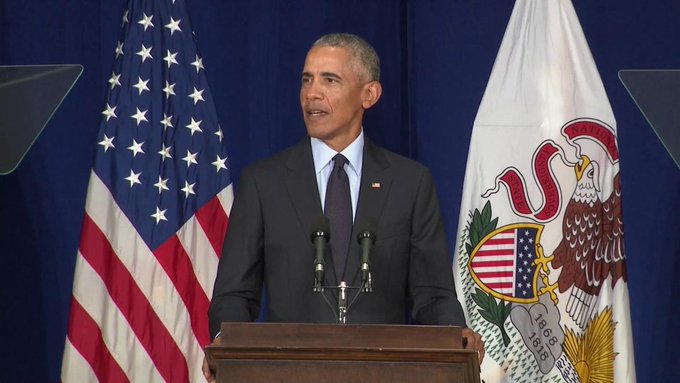 Barack Obama: “We’re sure as heck supposed to stand up clearly and unequivocally to Nazi sympathizers! How hard can that be? Saying that Nazis are bad!”

Obama, who had not once invoked his successor’s name in public appearances since exiting the White House, did so on Friday while describing people who stoke fear and division in order to “keep their power and keep their privilege.”

“It did not start with Donald Trump,” Obama said. “He is a symptom, not the cause. He’s just capitalizing on resentments that politicians have been fanning for years.”

But the former president also said the country finds itself at crossroads under Trump.

“This is one of those pivotal moments when every one of us as citizens of the United States need to determine just who it is that we are and what we stand for,” Obama said. “Just a glance at recent headlines should tell you that this moment really is different. The stakes really are higher.”

While there have been plenty of big elections in U.S. history, Obama said the current political climate makes this one different.

In the past, Obama said, “there’s been at least rough agreement among an overwhelming majority of Americans that our country is strongest when everybody is treated fairly, when people are judged on the merits and content of their character and not the color of their skin or the way in which they worship God, or their last names.”

But the breakdown in political discourse has led the country to stray from its core principles of “the rule of law, human rights and democracy,” Obama said.

“Over the past few decades, the politics of division and resentment and paranoia has unfortunately found a home in the Republican Party,” he added.

“They’re not doing us a service by actively promoting 90 percent of the crazy stuff that’s coming out of this White House, and then saying, ‘Don’t worry, we’re preventing the other 10 percent,’” Obama said. “That’s not how things are supposed to work. This is not normal.” 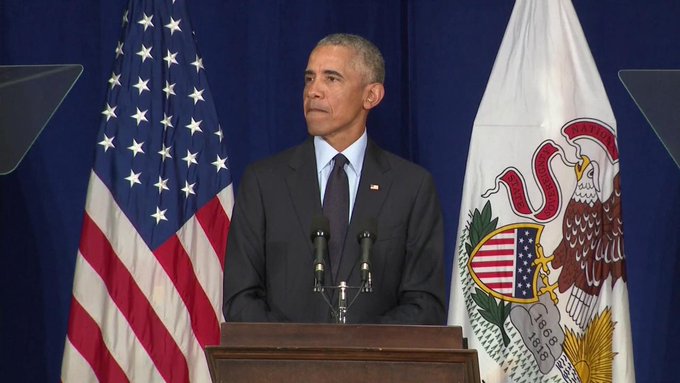 Barack Obama on anonymous op-ed writer: “They’re not doing us a service by actively promoting 90% of the crazy stuff that’s coming out of this White House, and then saying, ‘Don’t worry, we’re preventing the other 10%.'”

The former president criticized Trump’s ongoing war with the press.

“I complained plenty about Fox News, but you never heard me threaten to shut ’em down, or call them ‘enemies of the people,’” Obama said.

Trump, however, was not the only target for Obama. He took aim at the Republicans who have refused to speak out against the current president’s cozy relationships with Russian President Vladimir Putin and North Korean leader Kim Jong Un.

“What happened to the Republican Party?” Obama said. “In a healthy democracy, there are some checks and balances on this kind of behavior, on this kind of inconsistency. But right now there’s nothing.”

He also chastised the GOP response to gun violence.

“If you’re tired of politicians who offer nothing but thoughts and prayers after a mass shooting, you’ve got to do what the Parkland kids are doing,” Obama said. “They’re not giving up until they see a Congress that values your lives more than a campaign check from the NRA. You’ve got to vote.” 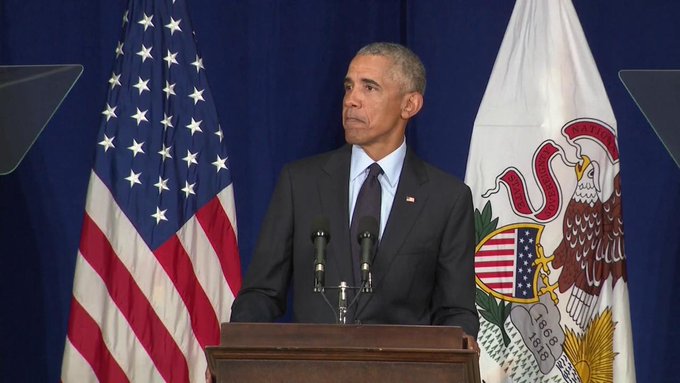 Barack Obama praises Parkland survivors: “If you’re tired of politicians who offer nothing but thoughts and prayers after a mass shooting…”

He even mocked supporters of the so-called #MeToo movement who don’t act.

“If you support the Me Too movement — you’re outraged by stories of sexual harassment and assault, inspired by the women who shared them — you’ve got to do more than retweet a hashtag,” Obama said.

The speech was billed as Obama’s first major political address since leaving office. He is scheduled to speak at a rally for Democratic congressional candidates in California on Saturday and at an event for Richard Cordray, the Democratic gubernatorial candidate in Ohio, next week. Last year, Obama stumped for then Virginia gubernatorial candidate Ralph Northam but otherwise largely kept himself out of the political fray.

“I needed to spend some time one on one with Michelle if I wanted to stay married,” Obama joked Friday. “The truth is, I was intent on following a wise American tradition of ex-presidents gracefully exiting the political stage to make room for new voices and new ideas.”

Obama ended his speech on a hopeful note.

“We have been through much darker times than these,” he said. “Somehow each generation of Americans carried us through to the other side — not by sitting around waiting for something to happen, not by leaving it for others to do something, but by leading the movement for change themselves.”